Originating at Science Hack Day, San Francisco 2011, this project is ready to move to the next stage. The original project measured the drag on thin cardboard uppercase Helvetica letters in a homemade wind tunnel in a fairly rudimentary fashion. The letters were then rescaled to all have approximately the same drag. The results seem likely to be valid but not particularly precise. The final typeface was then built out of six different weights of Helvetica after sorting the letters into six gradations of drag. 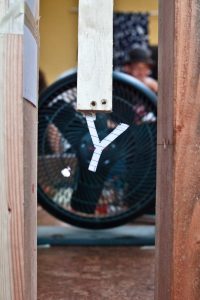 The next stage for the project is to do the drag measurements more scientifically and then create the resulting typeface more carefully. In particular, the letters would be laser cut from thicker card or thin wood, the drag measured in an actual wind tunnel, and the letters scaled more carefully on an individual basis instead of just using six weights. The final letters would then be cut out and retested for accuracy and another iteration performed if needed.