What would it look like to see the flux of neutrinos passing through us at all times? What if a representation were able to show the real data of a neutrino detector that is impossible for most people to visit or get a sense of because it is buried deep under Antarctic ice?

A set of 86 colored-light stations would be arrayed on the surface of the Earth in the same configuration as the strings in the IceCube neutrino detector in Antarctica. Each station will light up with a particular color corresponding to the energy of the neutrinos passing through the actual IceCube detector and each neutrino event would typically light a few dozen stations. Each station will represent a string of 60 vertically aligned Digital Optical Modules (DOMs) so the stations would show a projection of the signals from the DOMs onto the surface, probably by summation of the signals of the 60 DOMs corresponding to each station. 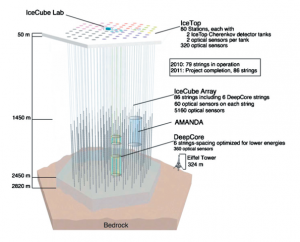 This stations will be spread over a little more than a square kilometer in area to replicate the positions of the strings in the ice. In most cases, a viewer would only see one station at a time as the inter-station separation is 125 meters. However, in the right locations, a viewer might be able to see more than one. Ideally the whole array would be positioned in a flat open area so that a viewer at night could see many of the stations, especially if viewing from an elevated position. 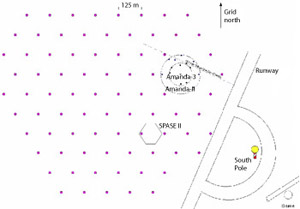 The array of stations would play in real-time the signals coming from the IceCube array, if possible, or at least replay real data from IceCube.

Furthermore, as you walk through the field of stations, a handheld device with screen will show you images and information about the experiment and location, activated by proximity to the station, with different information being revealed at each station.

(Note: It would be very cool to have one light for each DOM but that would require 5160 lights, which is a bit unrealistic at the moment. Perhaps if the original project works out well, then it would be great to expand to a full display using some different tech.)

Ideally, the array of stations would be set out over a square kilometer of flat ground, in the same arrangement and scale as the IceCube strings. However, for prototyping and a different kind of installation, it would be good to install the network on an ice rink or snow-covered field or football field, simulating the conditions of Antarctica, and letting people walk between the stations. Obviously the scale would need to be severely compressed (by a factor of as much as 100 for a small ice rink), but it would still give a good sense of the signals coming from neutrinos. In fact, it would be easier to see the overall patterns on this smaller scale, but it does miss something by not being at the full size.

Each installation of the network could be done slightly differently to take advantage of the local environment.

If the larger scale version was completed, with one light for each DOM, then the strings would ideally be hung in a large cathedral.

When a neutrino passes through the array, it interacts with the ice, creating muons traveling faster than the speed of light in ice. The muons give off Cerenkov radiation, which looks like a cone of blue light, and this light is detected by the photomultiplier tubes, allowing recreation of the entrance path of the neutrino. 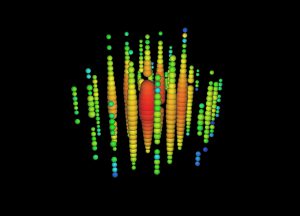 There is a constant stream of neutrinos being detected by the array (approximately 275 per day), although most of these are atmospheric neutrinos rather than the sought-after galactic neutrinos.

Each display would likely be communicating by radio link to a base station that is internet connected. Each display could be a multicolored high power LED such as those in the MaxM units by BlinkM.

Communication could be via an 802.15.4 network or similar. Perhaps the very cool looking pinoccio devices would work for building the mesh network. I’ve been speaking with the kind folks at pinocc.io and they are being extremely helpful. Definitely check out their offerings!

For a hanging strand display, might these work? http://www.seeedstudio.com/depot/Digital-RGB-LED-FlexiStrip-60-LED-1-Meter-p-1666.html?cPath=81_79

For the device that shows information when in proximity to different stations: the handheld object would be an Arduino with RFID antenna and TFT LED display. Each station would have an RFID tag in it that would trigger the handheld device via the antenna.

IKEA Fado lamps (hand-blown 25 cm diameter glass shades) would be ideal but many other solutions are possible.